Remember how I raved about seeing Mike Daisey's Invincible Summer? Well, last week something pretty terrible happened at one of his performances...

From his website:
Last night's performance of INVINCIBLE SUMMER was disrupted when eighty seven members of a Christian group walked out of the show en masse, and chose to physically attack my work by pouring water on and destroying the original of the show outline.

I'm still dealing with all the ramifications, but here's what it felt like from my end: I am performing the show to a packed house, when suddenly the lights start coming up in the house as a flood of people start walking down the aisles--they looked like a flock of birds who'd been startled, the way they all moved so quickly, and at the same moment...it was shocking, to see them surging down the aisles. The show halted as they fled, and at this moment a member of their group strode up to the table, stood looking down on me and poured water all over the outline, drenching everything in a kind of anti-baptism.

I am continually disgusted in the way people use their supposed Christian beliefs to defend such horrific and oppressive behaviour....anyway click the above link for the rest of the story.

In other news, I saw Children of Men and Bob&Carol&Ted&Alice this weekend. BnCnTnA was awesome and I love Elliott Gould and his fabulous schlmiel-ness forever and ever. That film is Gould at his Gouldiest (Chioke told me he was at his Gouldiest in Californa Split, but I beg to differ). Watch it just for the scene between he and Dian Carroll which is the best dramatization of sexual frustration I have ever EVER scene. I laughed so hard I could barely breathe. 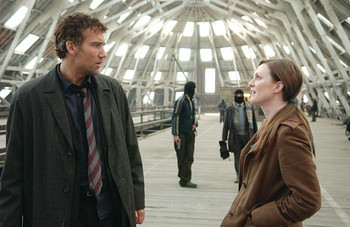 As for Children of Men...I am sorry everyone (especially you Clive, I love you still) but what the hell was that? It was a barely watchable incoherent mess. I really had to force myself not to turn it off. There were pieces of a good film in there, but they fell easy prey to the forces of the corny pointless script. Was the book any good? Was there any interesting story there to begin with? I couldn't tell.