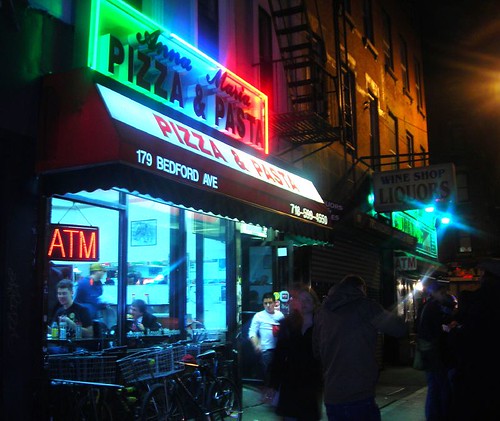 I got my hearty laugh! Last night as I waited for the bus, drunk on two strong margaritas and good times after Girls Night in the backyard at my crib, the funniest thing rolled by: an ice cream truck cruising slowly up the avenue with a shredded up back tire, ice cream man slung out the side blasting Rich Boy's track Throw Some D's! Me and the other girl waiting for the bus busted up laughing. I doubled over and she laughe and yelled out "That was awesome!".

You can hear the remix(featuring Andre 3000 rapping again!) here please clench your teeth and try to get by Jim Jones' bullshit verse, the rest (Murphy Lee, Lil Flip, Rich Boy, The GAME) is worth it. One of my favorite songs at the moment.

Must set a new goal...what should the next goal be?


In other more important news, from Kaiser Family Foundation.......

New Study Finds That Food is the Top Product Seen Advertised by Children – Among All Children, Tweens See the Most Food Ads at More than 20 a Day
34% of All Food Ads Targeting Children or Teens are for Candy and Snacks Half of All Ads Shown During Children’s Shows are for Food

Washington, D.C. – As the fight against childhood obesity escalates, the issue of food advertising to children has come under increasing scrutiny. Policymakers in Congress, the Federal Trade Commission (FTC), and agencies such as the Institute of Medicine (IOM) have called for changes in the advertising landscape, and U.S. food and media industries are developing their own voluntary initiatives related to advertising food to children. To help inform this debate, the Kaiser Family Foundation today released the largest study ever conducted of TV food advertising to children.

The study, Food for Thought: Television Food Advertising to Children in the United States, combines content analysis of TV ads with detailed data about children’s viewing habits, to provide an estimate of the number and type of TV ads seen by children of various ages. The study found that tweens ages 8-12 see the most food ads on TV, an average of 21 ads a day, or more than 7,600 a year. Teenagers see slightly fewer ads, at 17 a day, for a total of more than 6,000 a year. For a variety of reasons -- because they watch less TV overall, and more of their viewing is on networks that have limited or no advertising, such as PBS and Disney --children ages 2-7 see the least number of food ads, at 12 food ads a day, or 4,400 a year.

“Children of all ages see thousands of food ads a year, but tweens see more than any other age group,” said Vicky Rideout, vice president and director of the Program for the Study of Entertainment Media and Health at the Kaiser Family Foundation. “Since tweens are at an age where they’re just becoming independent consumers, understanding what type of advertising they are exposed to is especially important.”

Appeals Employed to Advertise Food.
One in five (20%) food ads targeting children or teens include a push to a website, and a similar proportion (19%) include the offer of a premium, such as a game or toy. About one in ten (11%) have a tie-in to a children’s TV or movie character.

Physical Activity Portrayed.
Fifteen percent of all food ads targeting children or teens include depictions of a physically active lifestyle, such as showing children skateboarding, snowboarding, or playing basketball.

“While public service ads on fitness and nutrition may well play an important role in helping to fight childhood obesity, we need to be realistic about our expectations, given how few such messages children see,” Rideout said.